It is the end of the month, and I’m here to tell you all about our lovely adventure with the Nailed it or Failed it friends I’m involved with.

We got to choose our own project this time.   After a long while of perusing the Pinterest,  I couldn’t figure out what to do.

I have pinned so many things!!

Let me just say do not go to Pinterest if you are hungry.   When you see a thousand food pins from me, I haven’t eaten breakfast yet.

I finally decided on. Peanut Butter Rice Crispy Kisses because CHOCOLATE and PEANUT BUTTER and NO BAKING!

I got everything out, measured ingredients,

unwrapped a bazillion Hershey Kisses and enlisted the girl to do the standing part.  The knees just haven’t been co-operating with me for about a month now.  Hello saw, meet uncooperative knees.

So all you do is boil sugars, add peanut butter and rice crispies. Scoop them out. Plop in a kiss and voila.

The recipe said DO NOT disturb the chocolates.  So I didn’t because I’m all about following directions.

But if you HAD say pushed the chocolate into the warm cookie, this might just happen.  It doesn’t matter though because they are an epic NAILED IT!!!

Go check out all my twits.   They all did a marvelous job.

About 5 months ago, the girl asked me if she could repaint her room.

I said sure, as long as you purchase the stuff and do the work.  Because I had painted the room a lovely pale pink with an appropriate boarder, and I wasn’t. going. to. paint. again!

So for months she perused books, magazines, and the Internet of all manor of Edwardian/Victorian bedrooms.   Looking at deep mauve’s and rich golds.   I was elated.

About 2 months ago she came home loaded down with paint buckets, rollers, brushes, etc.

I couldn’t wait to see the final colors she chose.

Oh Internets! I was so unprepared.

What happened to the mauve, gold, sage, cream????

I didn’t look in the room for about a month.  Because GREEN!

And when I did, I thought I might have another heart palpitation or 10.

What I really should have done was call Hoarders Buried Alive.

It stayed like that for a good month while she painted, and painted and painted.

The slow gene, it didn’t come from me.

I refused to look even in the direction of her room.

Then began the ripping up of the carpet.

That took some time too.

All I could think was GREEN!!!

It doesn’t look to bad.

She has ordered some curtains and bedding to match the walls and trim.

And look what we found underneath the still in really good condition carpet?  A wonderful hard wood floor!   I am once again elated!

Which got me to thinking…I wonder the hallway looks that pretty.

And while it is hardwood, someone painted it.   A gross army tan.

Who in their right mind would paint a lovely hardwood floor?

Strip and refinish the hall way.

If I had known what doing her room would lead to, I would have said forgetaboutit.

Today is the Parent’s wedding anniversary.

You also know what this means?   I’m much younger than 44!

When I was little I had two reoccurring dreams.

One was about termites, and I don’t want to talk about it.

The other one was about getting lost.

I was always with my dad, we were always in a hardware store, and somehow I always got separated from him.   I would run up and down the isles looking for him.   I don’t know why I didn’t call out for him in my dream.   Maybe I was just terrified that I was lost.

I’m still terrified about getting lost.

Sister calls it an adventure.   I don’t believe her one bit.

This week I took my MIL to the doctor in Wooster.   I have been to Wooster all of 3 times.

I had no idea where I was going, so I turned to Google Maps.

That was all well and good, but it didn’t settle my fear much.

Then the light bulb over my head went on and I remembered that Superman has a GPS.

Then I remembered that it hadn’t been charged in FOREVER.

Then I remembered that my phone has a GPS on it and all was right in my world…or so I thought.

2:00 am~~woke up from a dead sleep afraid I was going to get lost.   Stumbled into the bathroom and in the darkness wrote on the mirror “I need your car charger”  because my phone battery has been dying a very quick death and the car charger has a cord that fits my phone.

2:01~~went back to bed and slept soundly

8:30ish~~came downstairs to find that Superman left me his car charger and his GPS.   whoop!  whoop!   ate a bowl of cereal.   I like cereal.  Tried to turn on GPS.   Deader than a door knob.

9:00~~called MIL to find the address to the doctor’s office.  Plugged in the address and I was happy.

11:15~~the girl and I went to pick up the MIL,  then to Stuffmart to drop her off at work.  On the way there I noticed that nothing was charging.  Must be why Superman hasn’t charged his GPS in FOREVER.  His cord is broken.

11:35~~I sent the girl in to purchase another car charger, there was only a cord for the GPS.

Panic!   I needed one of them to work and I had no idea whether or not Superman’s GPS would even charge, but I am ever hopeful in the middle of a crisis….snort!

When we arrived at the doc’s office.  My phone battery didn’t have enough juice to even text.

Just as an afterthought I turned on Superman’s GPS.   Low and behold it was charging.

After the appointment MIL took me to a really cool restaurant called  The Barn.

It was beyond wonderful.

Have you ever smelled an old barn? 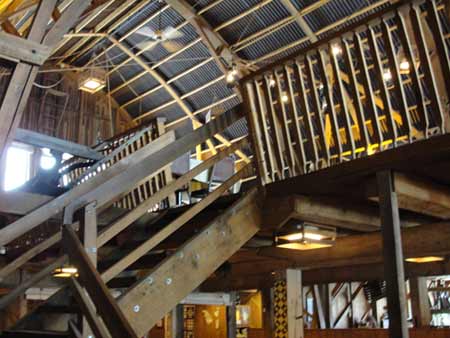 The smell of old untreated lumber, slight whiffs of cow and horse manure, old leather….I love that smell, and it smelled like that in there, minus the manure. 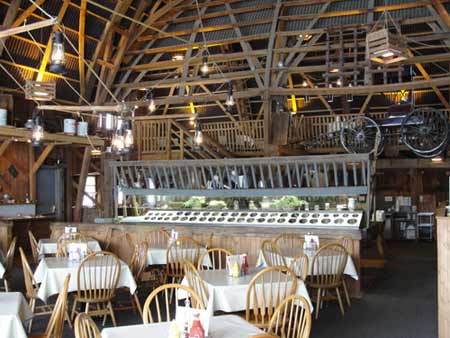 I was in heaven…well, restaurant heaven.

They had home made bread and honey spread.   I could have just eaten that for my meal.  Carbs and I are best buds.  I also got the salad bar.

It was great…even the cheese was hand shredded.

5:30~~I made it home without getting lost once, and that Internets is my version of an adventure.

Sorry Sister, I know I disappoint.

Unfortunately, he is spending his birthday in the hospital.

However, you are being waited on hand and foot, so maybe it all equals out.

I’ll be over to see you tomorrow.

I love you so.