Tonight whilst I was frittering away time at  stuff mart, I chose 2 isles to meander down. The first one was the bra isle. Why I chose that? Well the daughter needed some smaller ones so, since I was already there, I thought that I would see how far that section had come in the last 10 years or so that I had purchased them at stuffmart. They have come a long way. Bra’s in every color known to man….wired, stuffed, embroidered, laced and plain. You name it, they had it. I was particularly drawn to one brand called “sweet nothings” This tickled me because they were all padded.

The second isle that I was drawn to was the frozen food isle. I have been craving ice cream, but to get to the ice cream, I had to go down the frozen veggies. I want to know why white corn costs $2 more than yellow corn? Also, they have these new things out that you take the bag out of the freezer, throw it….bag and all…into the microwave and it steams them for you. All for the low….low price of $3 for 2 servings. Talk about a rip off!!!! Buy a steamer insert! They are only $4. Get a Pampered Chef steamer….they are $9. Then do your own. They also had this wonderful looking lasagna in a 9×7″ box. Do you know what it said??? 5 servings!!!

5???? I could eat half the box myself……without a second thought! sheesh! Back to the ice cream. I generally make my own or get the $1.69 half gallon at Aldi……did you know that stuffmart doesn’t have $1.69 half gallons of ice cream? They do have peppermint fudge, coffee fudge, caramel swirl, candy cone, fruity stuff, and then they have more varieties of vanilla than I could comprehend! I didn’t get any, but it sure was fun looking!

Saturday, the daughter and I went to Peebles. She had a gift card from Christmas for there….and they were having a red dot sale~~read 60% off. So in we went. She tried on skirt after skirt. She settled on this one. 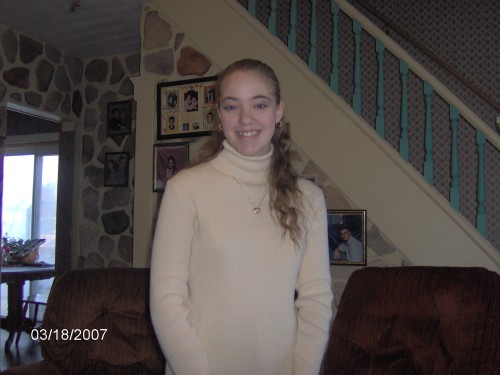 The boy starts his job tomorrow. He is so happy to have a job. Saturday morning he got his bike down from the hooks in the storage closet, and greased the chain, let all the “stale” air out of the tires and pumped “fresh” back in.

Now for our tongue lesson….ugh! This is so convicting!

Have you ever charged someone with wrongdoing before you established evidence of his guilt? We certainly don’t like that done to us, do we? When you do charge someone wrongly, without proper evidence, you fall into the same pattern as Satan, the official accuser of God’s Children. Emotional and spiritual maturity dictates that you must seek first to understand, rather than making an accusation.

Matthew 18:15~~Moreover if a brother shall trespass against you, go and tell HIM his fault between you and him alone; if he hears you, then you have gained a brother

Have you ever dampened someone’s hope, confidence, or enthusiasm by raising objections th his proposed plans? An untold number of people have missed their potential because of someone’s discouraging words. Make a conscious effort to always speak sincere words of affirmation, support and inspiration to those with whom you speak.

Job 29:24~~When they were discourage, I smiled at them; my look of approval was precious to them.

Just an average wife, mother, and homeschooling woman View all posts by chocolatechic